Invisible characters being added to (at least) some password fields

I've come across a very frustrating problem in the current beta (1Password 7 Version 7.2.5.BETA-1 (70205001) AgileBits Beta) where invisible characters are being added to certain fields.

Here's a quick illustration:
1. Make new bank account item
2. Add dummy routing and account numbers: 123123123 and 145525336255
3. Also add new password fields with the same dummy numbers in order to better illustrate the problem.
4. Show the routing number, saved as a password field, in large type, and there are 11 characters listed, not the 9 entered, and the first and last characters are shown as empty in large type. 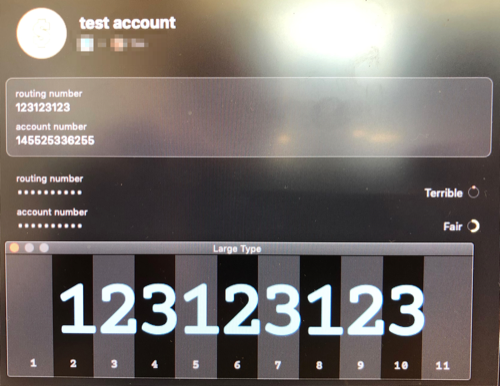 5. Do the same with the account number, and it shows a single invisible character at the beginning of the number 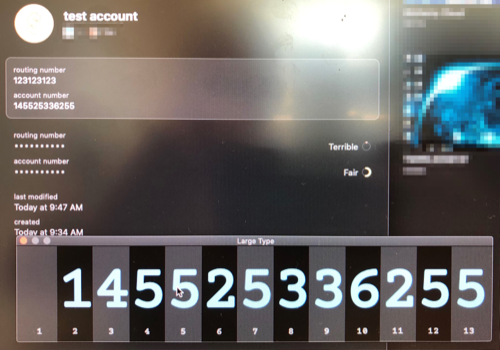 6. Copy the account number (the built-in field of the back account item, not the password field I added in step 3) by pressing the "copy" button that appears next to it when you hover over with the mouse pointer, and paste into TextMate (a fantastic text editor!) with invisible characters shown, and while it doesn't correctly show the invisible leading characters, it shows that the first digit of the account number is actually the 7th column of the pasted line (the following images show the line:column numbers as I pressed the right arrow key between screen shots. After one arrow-press it says the cursor is as column 4, then 7, then 8 when the cursor is finally between the first two digits. The two final images shows that there are 19 columns in the line even though there are only 12 numbers and no spaces or newline characters, then the final image shows 20 columns because I've added a space (the center dot).)

I came across this because I was unable to paste my bank account info into a text field on a website, presumedly because it was expecting a number instead of whatever invisible character is being prepended (and appended) to these fields.

Without doing an exhaustive search through my many items, and without extensive testing of the program, I've found similar behavior (just according to the invisible characters as reported by the "large type" view. If a below field type does not have a large type view then I confirmed the problem by counting columns in the copy/pasted field content as illustrated in step 6 above) in the following places:

That's probably enough to get you guys going. Very frustrating bug for users, but at least it's interesting! I'm happy to help with troubleshooting if necessary.